Amelia Island State Park sits at the southernmost end of the 13-mile barrier island in northeast Florida for which it’s named. A popular destination for fisherman throughout the area – particularly along the mile-long George Crady Bridge Fishing Pier which closed to car traffic in 1999 – Amelia Island State Park protects more than 200 acres of magnificent shoreline, salt marsh and maritime forest.

Amelia Island State Park serves as key habitat to nesting shorebirds including Least Tern and Wilson’s Plover from March 1 – September 1. During this period, long sections of the dune will be roped off to prevent visitors from crushing the nests. Amelia Island State Park is not frequented by nesting sea turtles, but protected gopher tortoise abound. These are land tortoises with “long” legs, not flippers, so don’t put them in the water where they’ll drown – even if you see them strolling along the beach.

What to do at Amelia Island State Park?

Fisherman flock to Amelia Island State Park year-round to fish from the beach or the George Crady Bridge Fishing Pier. On the Line Bait and Tackle shop (9549 First Coast Highway, Fernandina Beach, FL, 32034) is open to the public at the entrance to the bridge offering a variety of fishing bait and tackle supplies, snacks and refreshments.

Opened in 2018 by Denise and Spade Williams, On the Line Bait and Tackle replaced a previous shop that had long ago closed. The store represents a dream for the Williams’ who found a haven in Nassau County – where the park is located – visiting here with family as kids during the Jim Crow, segregated South when most beaches in Florida were hostile to African Americans.

Amelia Island has a unique history of welcoming Black visitors, most prominently at American Beach.

A Florida saltwater fishing license is required to soak a line here.

Be sure to clean up after yourself taking care to dispose of excess fishing line, plastic wrappers, food containers, Styrofoam and any other trash. Litter – particularly discarded fishing line – kills hundreds of thousands of birds, turtles, fish and marine animals around Florida every year which ingest the material or become tangled up in it. As with all heavily visited Florida state parks, Amelia Island State Park has a litter and trash problem – don’t be part of it.

Can you drive on Amelia Island State Park?

Driving on the beach is allowed on Amelia Island State Park as it is located outside of the Fernandina Beach City Limits which prohibit cars on the beach. However, due to the disastrous impacts beach driving can have on the dunes, dune ecosystems and the animals which call them home, please do not drive on the beach.

Understand the difference between what you can do and what you should do.

With its convenient location to both Fernandina Beach and Jacksonville, Amelia Island State Park is a great place to walk the beach. Once guests clear the beach areas near the parking lot which are typically full of fishermen, wide expanses of gorgeous north Florida beach with views of both Nassau Sound and the Atlantic Ocean open up.

Parking/visitation: Effective April 22, 2021: Beach parking at Amelia Island State Park is limited to 300 people at a time, with a maximum of 600 people per day. When the park reaches capacity at 300 people, the park closes to new visitors. After approximately 150 people leave, the park reopens to allow more visitors.

Fee: $2 per person or complimentary with a Florida State Parks pass.

Need somewhere to stay on Amelia Island? We used to own this gorgeous townhome that’s still available for rent.

Looking for somewhere to eat? We’ve got that covered too with our guide to the best restaurants on Amelia Island.

What is the Amelia Island State Park address?

Is there camping at Amelia Island State Park? 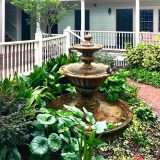 December 1, 2022 No Comments on The Addison: Charming Amelia Island Florida Bed and Breakfast 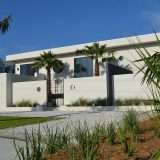 October 22, 2022 No Comments on Florida Beach House for Rent on Amelia Island 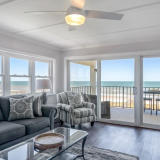 October 21, 2022 No Comments on The Best Oceanfront Vacation Rentals On Amelia Island, Florida 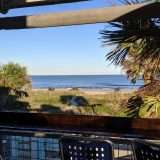 Amelia Island Restaurants on the Water

September 8, 2022 No Comments on Amelia Island Restaurants on the Water

The Marriott Frenchman’s Cove: A Vacation Rental in St. Thomas

What do you think? Cancel reply

Travel By Vacation Rental was founded by veteran travel writers Noreen Kompanik and Kristi Dosh. Along with our other travel writer friends, we're highlighting terrific houses, condos and other types of unique vacation rentals around the world.